My boyfriend and I got to have a few days off last week, so we took advantage of them and headed up to Port Elgin.

When searching for the perfect hotel; I had one goal in mind. Cheap. As a college student, budgeting and saving money wherever possible is super important. Of course, picking the cheapest hotel isn’t the best option, because cheap can tend to mean dirty or full of bugs. So I was sure to read every review of the hotels I looked at. 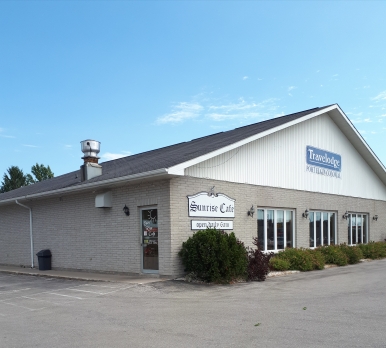 I ended up choosing Travelodge Port Elgin, as it’s a recognizable name, was relatively cheap (we spent $170 for two nights), and no mention of bug or dirt problems! It’s also located in a very populated area, surrounded by useful stores (such as Walmart, Dollar Tree, Giant Tiger) and restaurants like Swiss Chalet, Harveys, and Mary Browns. The hotel also has a restaurant called the Sunrise Cafe attached to it, and hotel guests get 20% off their meal. It is only open for breakfast and lunch, however. The Travelodge is also just down the road from a mini mall, which has a retro video game store inside (which made Kyle very happy).

The Travelodge, aside from the excellent location, also was a great hotel in itself. From the minute we checked in to the moment we checked out, the service was very friendly. Our room was homey and clean, including a fridge and even a microwave. On the table, there was a binder filled with activities to do around the area, and even the hotel’s cafe menu with prices. Kyle has told me before he is very picky when it comes to sleeping in hotel beds and on their pillows. Most of the time, they feel rock hard. But he had no problems sleeping here, which was a huge positive for both of us. My only complaint about the hotel itself was the pool. The first night we decided to check out the pool/spa, and were quite disappointed. The pool was very dirty, as was the hot tub. The edge where the water met the walls of the hot tub were caked in dirt, and we saw a clump of hair floating around. The second night we gave it another chance. The pool still wasn’t very clean, but the hot tub looked a lot better. If the management put a bit more time into the pool/spa cleanliness, that will make the hotel that much better.

It wouldn’t be a vacation without finding enjoyable activities to do! Even though we only had one full day in the area, we managed to pack a few fun-filled activities into our limited time.

To start off the beautiful late Tuesday morning, we packed our cameras and headed for Sauble Falls. Just a 30 minute drive from the hotel, and 5 minutes from the main beach, Sauble Falls is located in the Sauble Falls Provincial Park. Your GPS may take you to the main park entrance, where you’d be required to pay $15 for a day pass. Thankfully, the park ranger informed us if we drove just a few minutes farther down the road, there was a parking lot right by the falls which cost only $5 for two hours. That was more than enough time for us to walk around, and even on the falls.

After getting our feet a little wet, it was time to head to the beach. 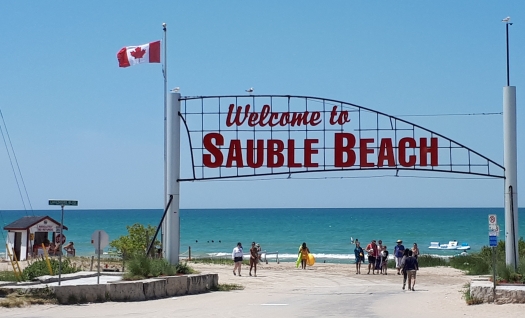 We spent most of the afternoon swimming and relaxing on the beach. Before we left, we went to check out the shops. We found a little souvenir store that had these cute candles that looked and smelled like candies and fruits. This strawberry shortcake one smelled as good as it looked:

We also found something to curb our sweet craving; an adorable little store called Nut and Fudge Co. Bruce County. The woman there was very sweet, and we purchased 3 large chunks of fudge for $20.

Pictured here is a piece of chocolate peanut butter fudge. Kyle also picked up a homemade peanut butter cup, which he really enjoyed. The fudge itself wasn’t the best fudge I’ve ever had, but it was still really good.

Here’s the part you’ve probably all been waiting for; the food experiences.

First off, as I previously mentioned, the hotel has a cafe connected to it. This cafe is only open until mid afternoon, but the food is well worth waking up early for. The place itself has a cute little country vibe, and the waitresses we had both mornings were super friendly, and listed off their specials of the day.

Our first morning, our goal was to make sure our bellies were filled so we could outlast our busy day. I ordered ‘The Sunrise’, which is two eggs, your choice of meat (I chose bacon and got four slices). The meal also includes home fries for no extra charge if you request them.

Kyle had a BLT sandwich, which he said is the best BLT he’s ever had. ‘The Sunrise’ was $8.25, and included coffee. The BLT was $6.75). The sandwich looks a little lopsided because my impatient boyfriend was really hungry and picked it up and tried to eat it before I got a photo. 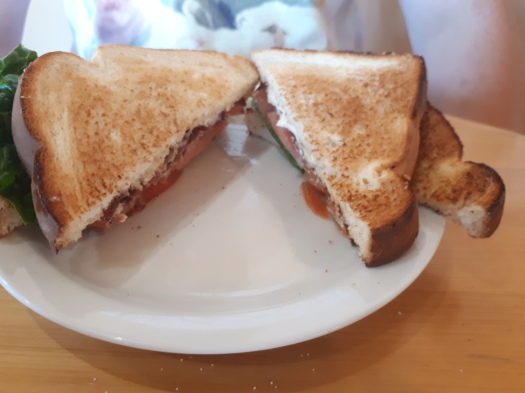 The second morning before we checked out, we got a few different things. Kyle opted for ‘The Platter’, which featured either pancakes or french toast, two eggs, and your choice of meat (bacon, ham, sausage, or peameal). It ended up costing $10.75, which I think is pretty fair considering what you get.

I opted for the salmon salad sandwich, which is similar to an egg salad sandwich. I was a bit nervous at first, but it ended up tasting great, and cost the same as Kyle’s BLT from the day before ($6.75). 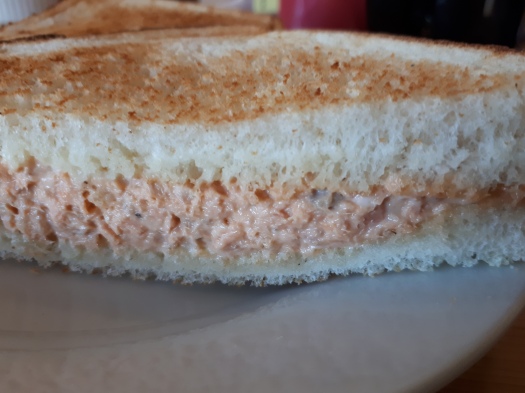 Tuesday was our day to choose whichever restaurant we wanted for dinner. Though Port Elgin had a lot of choices, we opted for Lord Elgin Fish and Chips, which was located right down the road from our hotel.

Sunday, Monday and Tuesday, they offer all-you-can-eat haddock and chips for about $17. Clearly, they are a popular restaurant on these days, as they told us the wait would be half an hour. We had no problem waiting. I was excited to see what the hype was about. They gave us this small device that would vibrate and flash when a table was ready for us, so we were able to stand outside the building while we waited.

Instead of going for the all-you-can-eat option, Kyle and I both decided to get the Cod dinner, which included a piece of battered cod, fries, coleslaw, and a dinner roll for $13.75.

The fries were crispy on the outside, but softer on the inside. The slaw had more vinegar than we expected, but it was still very good. The cod was absolutely delicious, very flaky, and extremely moist. The waitress Brenda made sure to keep checking up on us and make sure we were doing okay, even though she was running around doing a million other things. Overall, Kyle and I both agree this has to be some of the best fish and chips we’ve had to date, and we may even go back to Port Elgin just for this place!

Overall, we had a very fun few days up in Port Elgin. It’s a truly beautiful place with some real hidden gems. If you’re looking for a little getaway and not looking to spend too much, Port Elgin is a great place to check out.

There was an error retrieving images from Instagram. An attempt will be remade in a few minutes.